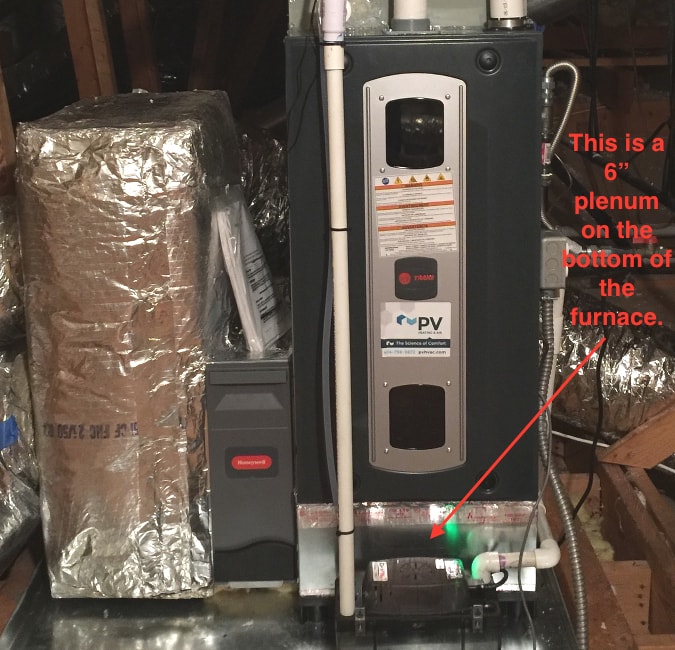 Ever seen a gas furnace with a return plenum on the side and the bottom?

Many people haven't because most HVAC installers don't bother with the bottom plenum. But if you have seen one, it's usually a sign of a smart, conscientious installation.

Allow us to explain…

For 5-ton HVAC systems, an additional 6" plenum on the bottom or the side of the furnace is super important.

The reason? Airflow. With the additional 6" plenum, you get more of it.

It's true in all 5-ton systems, but several 4-ton systems also require the 6" plenum. And if there's enough space to install one or we need to reduce static pressure in the system, we'll even install the 6" plenum in a 3-ton system.

Airflow matters for several reasons. For starters, it affects the comfort of a home's occupants. With too little airflow, your system might not effectively distribute air throughout the home. That's bad. Inadequate airflow also has a negative impact on system performance. Think poor efficiency, high operating costs, and premature equipment failure.

But when return air enters the furnace from both the side and the bottom (or both sides), airflow increases. The system operates more efficiently, and you enjoy more consistent air distribution. It's better.

More return air can also improve indoor air quality. Think of it like this: In a lot of 4-ton systems, 4" of the 20×25" air filter never gets used. You pull it out to change it, and there's 4" of clean filter at the top. Why? Because air was only moving through 16" of the filter media.

You see, that filter was designed for a properly installed 4 or 5-ton system with an additional 6″ of plenum. Without the extra plenum, there's no air for the rest of the air filter to, you know… filter.

Basically, your air isn't as clean as it would be had your contractor added the extra plenum.

Why is this such a common problem? Why can't contractors just install systems per the manufacturer's specifications?

Money, time, and knowledge. When you don't install the 6" plenum, homeowners save money on labor and contractors save time on the installation. In some cases, the contractor might not even realize it's a problem to neglect the 6" plenum.

But you know who doesn't beat around the bush when it comes to the 6" plenum on a 5-ton system? HVAC manufacturers. Installation manuals say you need to install one. It's abundantly clear.

In reality, failing to add the 6" plenum to the indoor unit is the more expensive choice. You don't save money in the long run.

Equipment failure, comfort problems, high utility bills, poor indoor air quality… All of these might be in your future if you've got a 5-ton system without 6″ of additional plenum.

Doing it the right way usually amounts to another hundred bucks or so on the installation charge. It's worth it.

At PV, we always install the 6" plenum on 5-ton systems. We often install it on 4-ton and 3-ton systems, too.

You probably already gathered that.

When you consider the problems you avoid and the comfort gains you enjoy by doing it right, it's an easy choice. We also think it's a choice most people would make if they knew what was at stake.

Unfortunately, most homeowners aren't aware of the 6" plenum "issue." Many people don't know how important it is to achieve optimal airflow throughout the home either.