Got HVAC Zones? You Might Need a Bypass Damper – or Not 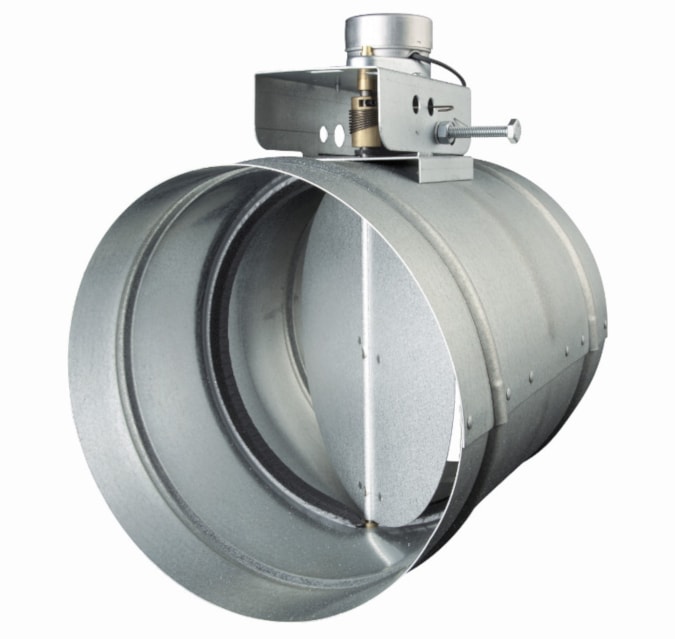 Here in Atlanta, zoned HVAC systems are a godsend during the summer. If your home has two or more stories but just one air conditioner connected to one downstairs thermostat, your upper floors can get much hotter than your first floor. And by "much hotter," we're talking anywhere from 2 to 5 degrees hotter. Maybe more.

Zoned systems solve this problem by forcing your air conditioner to cool the upper and lower floors separately. With zones, you can break out the board shorts, kick your shoes off, and stick a little umbrella in your drink - no matter what floor you're on!

During the day, you might be happy at 76 degrees downstairs - even if that means keeping it at 78 to 80 degrees upstairs. You're not spending time upstairs, so it's all good.

At night, you might want it to be 75 in your upstairs bedrooms. Downstairs? Who cares! You're not sleeping down there! Set the thermostat to 78 and forget about it.

But you know what? Not all zoned systems are the same.

Think you've got HVAC zoning issues in your Atlanta area home? Well, you might! Read on to find out more. In the event you do have a problem, the PV team can help you address it.

If your house has two or more HVAC systems complete with multiple outdoor units, multiple blowers, and multiple independent air duct networks, congratulations! You probably don't need any ductwork modifications to accommodate your zones. Your system was designed for totally separate HVAC systems. You're set.

Another good way to design a zoned system is with a variable speed air conditioner (and furnace) paired with a variable airflow blower. You get dampers installed inside your ductwork, send air only to the areas that need it, and rest assured that the system will deliver just the right amount of air to heat or cool the space. It's what variable speed systems are designed to do.

Then there's poor zoning design: standard, single-stage HVAC systems with dampers in the ductwork. These systems are often set up the same as variable speed systems with zones. However, since it's a standard system with only one speed, you're bound to experience problems.

Remember blowing into a straw when you were a kid? If you covered up part of the other end of the straw, the pressure inside it built up. This put some stress on your lungs and made you work harder to blow the same amount of air through the straw.

Well, adding zones to a standard HVAC system creates a similar situation. To send different volumes of air to different zones in your home, your HVAC technician has to install the dampers we mentioned earlier. These dampers live inside your ducts and respond to calls for air in different zones, opening and closing as needed.

The problem? When dampers are closed in one zone and open in others, your air conditioner has to send lots of air through less ductwork. It's just like when you covered up part of the straw and tried to blow the same amount of air through it.

Except that instead of putting stress on your lungs, the stress is absorbed by your HVAC equipment. Not good.

For these reasons, we never recommend zoning in a single stage system. Ever.

But if your HVAC system was set up this way and you're keen on keeping your zones, there is a solution. Sort of…

To relieve excess static pressure when some zone dampers are closed, you need to redirect the excess air. It would be like poking a hole in the straw while you blow into it to reduce the stress on your lungs.

Except that instead of drilling a hole in your ductwork and calling it a day, we install another duct.

This duct is called a bypass duct. Inside it, there's a bypass damper. The bypass duct connects your supply plenum to your return ductwork. The damper inside either allows or prohibits air from entering the bypass duct, depending on the situation.

Let's say you've got a two-story home with two zones, one for each floor. When the system is cooling both floors, all of the zone dampers are open so that air can flow everywhere. The bypass damper, however, stays closed. Now pretend you only need AC upstairs. The dampers for the downstairs will close and the ones for upstairs will stay open. The bypass damper will also open, redirecting excess supply air back into your return and reducing static pressure.

Does that sound super technical? Don't worry. Just know that the bypass damper and bypass duct are preventing excess air from breaking things.

If you've got a standard, single-stage air conditioner and are considering adding zones, be absolutely sure your HVAC contractor installs bypass components.

Things to keep in mind about bypass dampers and ducts

The bottom line? Zones are awesome. But you've got to do 'em right.

If you've got a basic air conditioner that turns on when you need cool air and turns off when it satisfies your thermostat setting, don't add zones. If you've got a system like that and you already have zones, add a bypass. You'll be glad you did.

We often encounter zoned systems with improper bypass components. Other times, a zoned, single-stage system won't have a bypass at all! These mistakes can cost you big time and lead to a whole lot of discomfort.

And if you're thinking about adding zones and it's almost time to replace your system anyway, variable speed equipment is the way to go. You'll be able to enjoy problem-free zoning and all the comfort benefits variable speed systems offer.

You'll also be comfortable throughout your house - upstairs and downstairs - all summer long.