R-22 Refrigerant Leak? Here’s What to Do 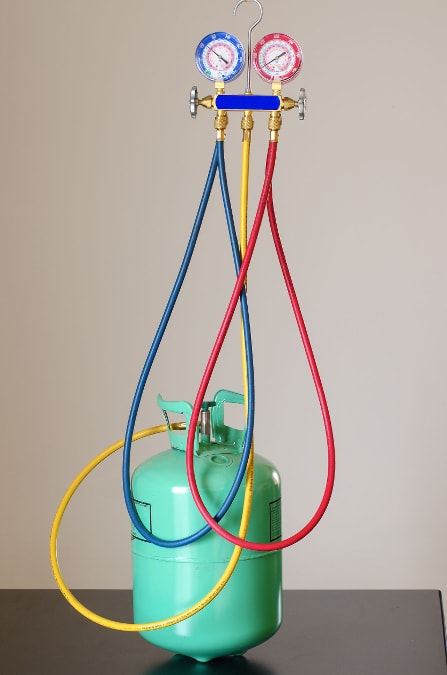 Your heating and air system might contain a substance known to cause ozone depletion. Did you know that?

Systems manufactured after that year use a new type of refrigerant, R-410A, which doesn't have the negative environmental impact of R-22.

The switch to R-410A isn't due to industry altruism so much as necessity. Many years ago, the US EPA mandated a gradual phase-out of R-22 refrigerant. By 2020, it won't be legal to buy or sell R-22 anymore. In the meantime (as in, now), it's still possible to service systems that use R-22 with more R-22.

Unfortunately, servicing an R-22 system isn't as straightforward as it might seem.

And it's getting more expensive every day.

Per the EPA mandate, HVAC manufacturers have stopped making R-22 systems altogether. There's less demand for R-22 than in the past, so it's getting more scarce. With increased scarcity comes higher prices. If you're planning to buy R-22 today, prepare for sticker shock.

Nowadays, R-22 costs about four times as much per pound when compared with R-410A. As January 1, 2020 approaches, expect that gulf to widen further.

Oh, and you can't service an R-22 system with R-410A. It would be like fueling a gasoline tank with diesel. The system would break down and quit running.

If you don't have refrigerant leak, there's nothing to worry about! Not yet, anyway. You can keep using your R-22 system.

But when the refrigerant does start to leak - a common occurrence with older systems - you'll be faced with three choices:

Option 1 is expensive. And if the refrigerant leaks again, you'll pay increasingly high prices for R-22 until January 1, 2020. After that date, your only choices will be to retrofit or replace the system the next time you have a leak.

Buying more R-22 for your system is like pouring money into an old, dilapidated car over and over again instead of just getting another one. Unless you have some special affection for your HVAC equipment, there's really no point.

And while there are R-22 replacement refrigerants out there, there's no such thing as a true "drop-in" that provides normal system performance.

At PV, we only add R-22 replacements to leaky systems that we're about to switch out. If the homeowner needs the system to run for a few days between now and the day we install a new one, an alternative "Freon" will suffice. But that's the only time it makes sense to use it.

For a true retrofit, you have to hire a pro to swap out components inside your system, add refrigerant, and perform a variety of modifications. This sort of arrangement might be cost-effective at scale - like if you own an apartment complex with 50 HVAC systems - but it makes little sense for the typical homeowner.

For most R-22 leaks, most of the time, system replacement makes the most sense.

You probably don't want to invest in aging HVAC equipment that depends on the integrity of a soon-to-be obsolete chemical. In the event of a refrigerant leak, the best option is usually to replace the old R-22 system with a new R-410A system.

Your new system will also be a lot more efficient than the old one. And future refrigerant leaks? They won't break the bank.