Float Switch? We Prefer a Wet Switch in the Drain Pan 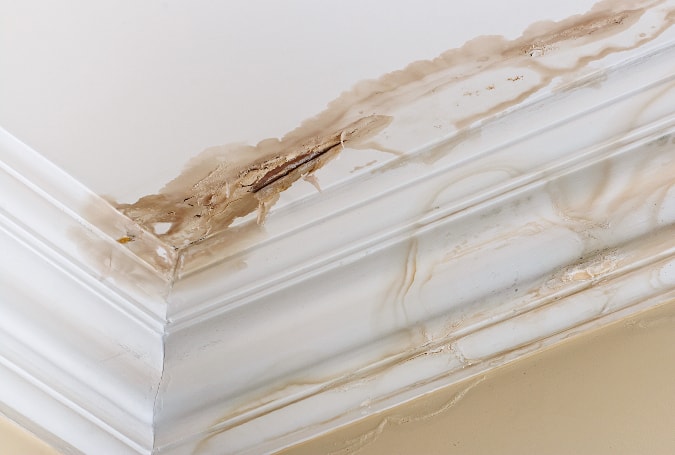 If you've ever examined your HVAC system during the summer, you've noticed that the air conditioner produces a lot of water. Ok, it doesn't technically produce water. It removes humidity from the air, which becomes condensation (water). A PVC pipe channels the water to a suitable location.

Leaky air conditioners are bad news. If your blower is in your attic, the water can leak through your ceiling and cause serious damage. Even if the blower is in a utility closet or crawlspace, the damage from a leak can be substantial.

Luckily, most HVAC companies install a drain pan and float switch to help you avoid these sorts of problems.

If there's a clog in the drain line, the AC leaks into the pan. A separate drain line from the pan channels the water to the proper place. If the drain pan gets clogged - and it definitely happens! - water will eventually rise high enough to trip the float switch. The float switch is connected to your AC, and it shuts down the whole system when it's tripped.

That way, the system shuts off before it overflows the drain pan and causes damage.

Here's the thing about float switches…

They don't always work the way they're supposed to.

And yes, we've even seen systems that didn't have a drain pan and float switch.

In other words, float switches are not foolproof. And when it comes to preventing thousands of dollars in damage to your home, you want foolproof.

That's why we prefer the wet switch. It's a lot closer to foolproof.

When we install new HVAC systems, we equip them with a wet switch. Here's what it looks like installed inside the drain pan: 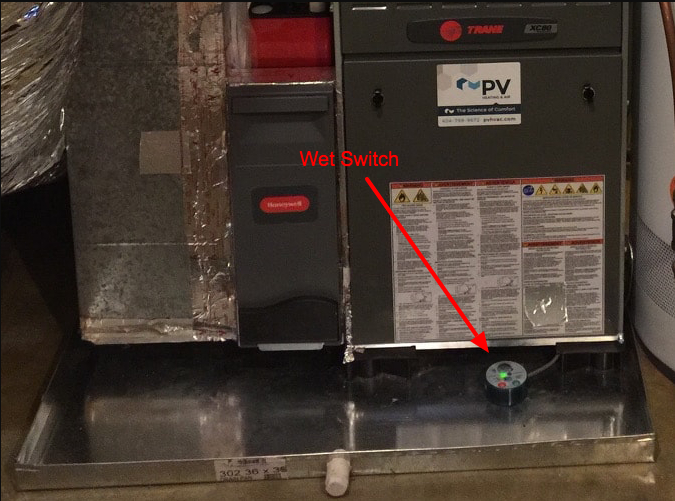 Unlike a float switch, a wet switch contains a sensor that shuts down the AC when so much as a drop of water touches it. It helps you avoid problems like…

It is more expensive than a float switch, but it's worth it. If you've ever seen a home damaged by a leaky air conditioner, you'll likely agree.

We still install a float switch inside the drain line.

You don't want a situation where the drain pan even comes close to filling up. With a standard pan/float switch installation, a lot of water can leak out before the float switch turns the system off (assuming it works properly). The wet switch keeps that from happening. And yet, we still install a float switch inside the drain line - it's like a second line of defense.

Depending on what's causing the leak, either the wet switch or the drain line float switch will reach its threshold first. Whatever happens, it'll shut your system off.

You'll avoid having a waterfall soak through your ceiling or flood your crawlspace.

Part of a comprehensive HVAC inspection is cleaning out your air conditioner's drain line. During the cooling season, water runs through that line every day for several months. Over time, the drain line gets dirty and clogs. It's a common problem, but it doesn't have to be. Have it cleaned out twice per year, and you'll be set!.

Not all HVAC companies clean your drain line twice per year, but we do.

Still, when all else fails, the wet switch will save you. It's one of those things that you hope you never need to use - like an insurance policy.