Before You Install That Range Hood, Read This 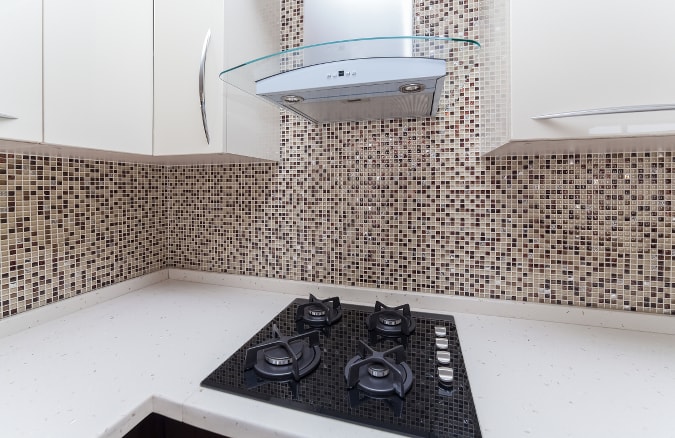 Range hood fans can be really powerful. That power is great for exhausting smoke, odors, and steam out of your kitchen so that none of those things circulate throughout your home.

But as Uncle Ben reminds us, great power brings with it great responsibility (see below).

Powerful range hoods, it turns out, can cause problems when builders, contractors, and homeowners don't install them responsibly. Some of these fans move air at a rate greater than 1000 cubic feet per minute (CFM). As a result, they increase negative air pressure and force "make up" air to enter the home through gaps and cracks in the building envelope.

In other words, powerful range hoods can inadvertently bring dirty air into your home, creating an unhealthy - and potentially dangerous - environment.

First things first: What are positive and negative air pressure?

For every cubic foot of air that leaves a building, another cubic foot enters it:

In conditioned spaces, we want to control where the air enters and leaves. That's why we try to install ducts, supply registers, and return grilles as intelligently as possible. It's also why we add mechanical ventilation systems to some homes.

Balanced air pressure is good, too. Here in the South, high performance homes often contain ERVs to exchange old air for fresh, clean air. In these airtight homes, not much air enters or leaves on its own, so the ERV is needed to maintain good indoor air quality.

Lots of negative pressure, on the other hand, isn't good for any indoor environment, no matter how tight or leaky the building envelope. When a home - or even a room - is under negative pressure, large amounts of air are being sucked out of it. That air has to be replaced somehow, and what happens is that air enters the home via:

Needless to say, air that enters your home through the attic or crawlspace isn't the kind of air you want to breathe. And in some situations, negative pressure can lead to carbon monoxide, or CO, backdrafting. When air enters the home to replace the air being removed, some of it might contain CO that was supposed to leave your home through an exhaust vent.

This situation is more common than you might think, and it's dangerous.

Which brings us back to range hoods. That powerful new kitchen fan might be making your home "go negative" by sucking out more air than your home passively takes in. When that happens, indoor air quality doesn't improve actually when you run the fan.

It gets worse. Lots worse.

According to Section M1503.4 of the International Residential Code, you should install a make up air system with motorized controls if your exhaust fan is rated at 400 CFM or higher. Many kitchen fans move air at a rate of over 1000 CFM. Do you think that most people whose fans are that powerful are also installing make up air systems?

They're not. But they should be.

What happens when you run an 1100 CFM kitchen fan in a high performance home?

One day, we got a call from a family with an air quality problem. Despite investing in an energy efficient home, they weren't breathing healthy air. Every time they ran the first floor kitchen fan, air would enter the home through bath fans and gaps in the attic envelope on the third floor.

In other words, the kitchen fan was too powerful. It was causing a severe negative pressure imbalance in the home.

Large quantities unfiltered air were entering from the outdoors and the attic. Not only was the air unclean - it was increasing the heating and cooling loads of the home. The homeowner even installed a ventilating dehumidifier to introduce positive pressure and remove the humidity entering the home when the kitchen fan was on. It was all to no avail, of course.

That's eleven times as much air going out than coming in! No wonder there was air entering the home from all sorts of weird places.

The solution? We designed and installed a make up air system sized just for the home, which included:

We also performed blower door-guided air sealing to address air leakage that wasn't mitigated when the home was built.

As a result, the client was able to balance the negative pressure produced by the range hood with positive pressure from the new ventilation system and ductwork. Now the family can breathe healthy air. It doesn't matter how often they run the kitchen fan.

CO wasn't a factor in this case, but it can be.

Thankfully, this client didn't have an issue with CO entering the home.

But when a kitchen fan creates a negative pressure environment, CO backdrafting from gas appliances is a potential problem. That's why it's important to insist on a combustion safety test as part of any energy audit, blower door-guided air sealing work, or ventilation-related renovation you pursue.

The only way to know there's a CO issue is to test for it after making the home improvements.

So, how can you ventilate your kitchen without creating a harmful air pressure imbalance? And if you've already got a powerful kitchen fan and a really tight home envelope, what should your next move be?

Here are our recommendations for different situations:

You're about to install a new range hood

Have a professional measure the amount of air currently entering and leaving your home under various conditions. That way, you can make an informed decision about how powerful your new kitchen fan should be. PV's whole home assessment includes this test.

Depending on how tight or leaky your home is, that new fan could be generating excessive negative pressure. If you're in an older, pre-2000s home and haven't performed any major energy efficiency improvements, you might not have a problem. But if you're in a newer, tighter home, it's possible that you're bringing in dirty air that you'd rather not breathe.

Hire a professional to perform a combustion safety test to see whether any CO enters your home while the fan is running. Again, PV's whole home assessment includes this test.

Go for a sub-400 CFM range hood or use a recirculating fan instead of a ducted range hood.

Recirculating fans don't exhaust any air, but they do contain a filter to capture the greasy stuff inside your cooking fumes. They're better than nothing, but if you've got one, consider cracking a window while cooking.

Though rare, it's possible for these little range hoods to suck natural gas out of your stove's innards and blow it into your kitchen. It's a good idea to perform a combustion safety test, just to be sure.

In spite of these problems, range hoods are pretty great.

Believe it or not, we like range hoods. We've even got them in our own homes! What we don't like are negative pressure environments with polluted air.

You probably don't either, which is why it's a good idea to know what you're getting before you install a powerful kitchen fan.